Introduction to St Irenaeus' Demonstration of the Apostolic Preaching 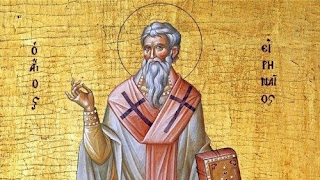 Demonstration of the Apostolic Preaching

The following excerpt is taken from John Behr’s Introduction to his remarkable English translation of St Irenaeus' On The Apostolic Preaching and is provided here solely for educational purposes.

That Irenaeus had written a treatise entitled The Demonstration of the Apostolic Preaching was long known from a reference in Eusebius’ Ecclesiastical History (5:36), but, apart from this, the work seemed to have disappeared without trace. However, in December of 1904 the then Archimandrite Karapet Mekerttschian discovered a manuscript in the library of the Church of the Mother of God in Yerevan, which proved to contain an ancient Armenian translation of the last two books of Irenaeus’ Against the Heresies and his Demonstration of the Apostolic Preaching. This manuscript is now preserved in the Matenadaran of Yerevan (ms 3710). According to a scribal postscript, at the end of the Demonstration, the manuscript belonged to ‘the Archbishop Ter Johannes … the brother of the holy king’. This king is probably Hetum I (1226-69), whose younger brother was renowned for his learning, and served as a bishop from 1259 until his death in 1289. The manuscript can, therefore, be dated with some confidence to the middle of the second half of the 13th century, although, as we shall see, the translation was made several centuries earlier.

The text of the Demonstration was first published three years later, in 1907, together with a German translation, and an epilogue and brief notes by Adolf Harnack, who also divided the text into one hundred ‘chapters’. Despite being the first edition of the text, it included neither a description of the manuscript, nor any critical apparatus noting the various textual emendations which, it would appear from the accompanying translation, must have been adopted. The text was subsequently a subject of discussion amongst Armenian scholars, resulting in several proposed changes to the text and new translations, including a Latin version prepared by S. Weber following the controversy resulting from his earlier German translation. When the text was reprinted in 1919, with an English and French translation, it included a description of the manuscript and occasionally noted an emendation to the manuscript text, but it was still far from satisfactory, and even introduced several new misprints. Various other translations were soon published, including a second English translation by J. Armitage Robinson.

After a lull of several decades, two further translations appeared, both of which immensely further our understanding of the text. Firstly that of J. P. Smith, whose translation was accompanied (and exceeded in length) by copious notes, which subjected the difficulties of the Armenian version to a rigorous investigation and discussed the merits of previous translations and proposed emendations. This was followed, a few years later, by a new French translation prepared by L. M. Froidevaux. Whilst this edition added many insights to those of Smith, its most important contribution was the appendix which contained a collation, prepared by Charles Mercier, of the printed text of PO 12.5 with a film of Yerevan 3710, detailed 69 differences. Smith’s translation, however, is sometimes misleading, and his treatment, though not translation, of a particularly important and difficult passage in chapter 43 of the Demonstration, in which he was followed by Froidevaux’s translation, gave rise to further controversy.

Alongside these translations, which are all based upon the sole extant complete manuscript, extracts from the Demonstration contained in two other manuscripts have since come to light and been published. The first manuscript, containing a work entitled The Seal of Faith, was discovered, again by the now Bishop Karapet Ter-Mekerttschian, in 1911 in the monastery of Saint Stephen in Daraschamb. This manuscript dates from the 13th century and contains a Monophysite florilegia, compiled under the Catholicos Komitas (612-628). The text contains seven quotations attributed to Irenaeus, of which two short extracts derive from the Demonstration. The primary interest of these fragments, however, is that they demonstrate the utilization of the Demonstration in the seventh century, rather than for any contribution towards establishing a better text. More important, in this respect, is a 14th century manuscript, known as Galata 54, found in the monastery of Saint James in Jerusalem and now preserved in the library of the Armenian Patriarchate in Istanbul. This manuscript is also a collection of patristic texts, arranged more or less chronologically, concerning Christology, that were perhaps compiled around the same time as The Seal of Faith. The extracts from Irenaeus are presented in the order of the texts themselves, beginning with extracts from Book III of Against the Heresies, the translation of which is otherwise unknown. There are thirteen extracts from the Demonstration, which comprise less than a fifth of this work. Judging from a comparison of the extracts from Against the Heresies presented in this manuscript with the Latin text as we otherwise have it, it seems that the excerptor tended to simplify the text by keeping what he considered to be essential and eliminating the superfluous. Only rarely does Galata 54 offer a better text than that of Yerevan 3710. The two manuscripts also share a number of common scribal errors, which indicates that both are derived from the same archetype.

Finally, after a second lull, A. Rousseau, after completing his exceptional edition of Against the Heresies for Sources chrétiennes, published what, in the absence of a full critical edition, must be regarded as the standard edition of the Demonstration. In a useful introduction, Rousseau describes the previous editions and translations, the relationship between Yerevan 3710 and the texts contained in the Seal of Faith and Galata 54, and analyzes the peculiarities of the Armenian version itself, in an attempt to discern the Greek original. Recognizing that the Armenian version is itself a translation, of a very idiosyncratic character, Rousseau offers us two translations printed in parallel: a Latin translation, which, because of the flexibility of its idiom, is able to reproduce an exact, literal translation of the Armenian text; and a French translation, in which Rousseau allows himself to present what he considers a translation of the Greek lying behind the Armenian. Rousseau also includes extensive notes which, as with Smith, are longer than the text itself), in which he takes full account of previously suggested emendations, together with the new material presented by Galata 54, as well as presenting his own conjectures, frequently offering a Greek retroversion as the basis of his analyses. He concludes his edition with six appendices, five describing aspects of Irenaeus’ theology, with Mercier’s collation as the sixth. The work throughout demonstrates Rousseau’s intimate familiarity with all the texts of Irenaeus in their Greek, Latin and Armenian versions, and is a remarkable achievement of scholarship.

Although the only complete manuscript of the Demonstration was copied in the thirteenth century, the translation itself was the product of the “Hellenistic School,” which, from c. 570-c.730 translated a number of Greek works. The translations of this school are classified according to four successive periods: the Armenian version of Irenaeus belongs to the first group; together with the Grammar of Dionysius Thrax, a handbook on rhetoric belonging to Aphthonius, various Philonic and pseudo-Philonic works, some of which are extant only in Armenian, and the so-called Alexander Romance erroneously ascribed in antiquity to Callisthenes. The earliest evidence we have for the Armenian version of the work of Irenaeus is a letter dated to 604/5, which would indicate that the translation was made in the final decades of the sixth century. Rousseau, following H. Lewy and Froidevaux, is more specific, locating the translation in the years 572 to 591, the period when, following an invasion by the Persians, a group of Armenian exiles resided in Constantinople.

While the translations of the ‘Golden Age’, the fifth century, had endeavored to translate Greek works in a fluent style, respecting the idiom of the Armenian language, the translations of the Hellenistic School were more concerned to reproduce the Greek original exactly, both in syntax and in the construction of compound verbs and nouns. This resulted in translations couched in a cumbersome artificial literary style which is scarcely comprehensible without reference to the Greek original. Given their character, and the fact that the material includes works on grammar and rhetoric, Lewy suggested that these translations were intended as ‘keys’ for those Armenian students who were seeking entrance into the Byzantine schools. This is further borne out by the fact, as Terian observes, that the translations of writers such as Philo, Plato and Aristotle are all incomplete; there was no attempt to translate the complete works of important thinkers, but only to provide select works for tutorial purposes.

If the general purpose of these translations is to provide a working guide for an Armenian student learning Greek, then one would expect the translation to err on the side of an over literal accuracy. We do not have another witness to the text of the Demonstration, but, as it is generally agreed that the Armenian version of Against the Heresies, Bks. 4-5, are from the same period of the same school of translation, it is possible, by comparing this text with the Latin version and the numerous Greek fragments, to evaluate the reliability of the Armenian translation. Such a comparison indicates that the translator did indeed scrupulously render the Greek, word by word, into Armenian.

More importantly, such a comparison also reveals some of the characteristic features of the method of translation. This is not a place for a detailed examination of such features, but a brief mention of some of the more important ones will contribute toward a better understand of the translation. Apart from various syntactical features, which are unknown in classical Armenian (such as the genitive absolute or the singular verb with a neuter plural subject), where the translator has simply mimicked the Greek, and other idiosyncratic turns of phrase, the most important feature of the translation is its various ways of treating vocabulary, which make the Armenian version very cumbersome and wordy.

Composite nouns or verbs are often mechanically rendered by a corresponding Armenian composite word, or, more frequently, the prefix is left separate. Sometimes a composite word, for example the verb μετέχω, is rendered by a verb together with a noun: “to-accept participation” (31), while the substantive μετοχή is rendered by two nouns, the second in the genetic case: “participation nof-reception” (31). Sometimes this process has an incomprehensible result, for example, when the verb διαμένω is translated by two verbs, declined identically and without any conjunction: “to-remain to-pass-through” (1), which Smith translated as “you remain at a standstill”.

Much mor frequently a single word is translated by a “doublet,” a pair of words slightly differing in meaning. The purpose of this was clearly to bring out the various shades of meaning contained by the Greek word, which would have been insufficiently rendered by an Armenian word. Most frequently nouns are combined by a straightforward conjunction. However, these doublets are sometimes simply juxtaposed, for instance, πρόδρομος, “precursor forerunner” (41). Alternatively sometimes one is made the complement of the other, such as, for κοινωνία, “communion of-unanimity” (6). A frequent method, when using a doublet to translate a Greek verb, is to combine a participle with a finite verb, for instance προμελετάω, ‘before-exercising they-were-accustomed’ (46).

Popular posts from this blog